I already had an ASUS P4T-E board lying about, along with a 1.8GHz Pentium 4 chip and a gig of RAMBUS memory. Nice stuff to have on hand... After ordering four 80Gb Western Digital drives and a Highpoint RocketRAID controller card, I set about building the new server.

The plan was that as soon as the operating system was installed and stable, the parts would all be shipped to Ohio where Dick would reassemble them in their new permanent home, so I didn't bother with a case. Here's my work surface with the first and most important component already set up: the power supply. It's a 400W beast. With a P4 and four drives as well as the CDROM to feed, I needed a lot of juice. 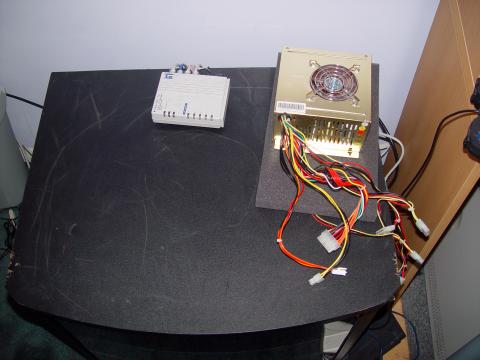 And here's the motherboard. The ASUS P4T-E is a very nice board indeed. I used it for my (Windows) gaming setup for many months and it ran reliably for days at a time. Should work even better with a real OS installed. 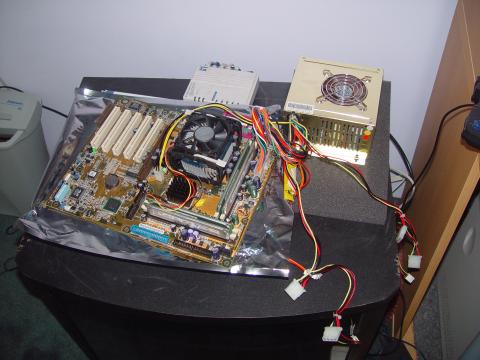 Throw in the four drives (all colour-coded so Dick would know how to reassemble them on delivery) and it's starting to get a bit crowded in there. I had to add in a few power splitters and make some some adjustments to where all the hardware was located just to get everything powered up. If I had had a spare case it would certainly have been better to use that. 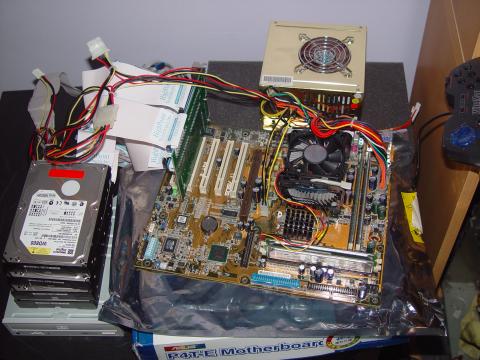 Only one more thing to add: the graphics card. Unfortunately, after I added a card and powered the system on, it all went horribly wrong.

The RocketRAID card beeped, the CPU fan started spinning and the drives powered up. Then after barely a second, the power was cut. I checked all the cables and connections and the problem kept reoccurring.

After unplugging one of the drives I was able to start the system. At first I thought there was a problem with the RAID card or one of the drives. Testing various drives on various connectors revealed that this was not the case. I could run any combination of three drives but not all four. 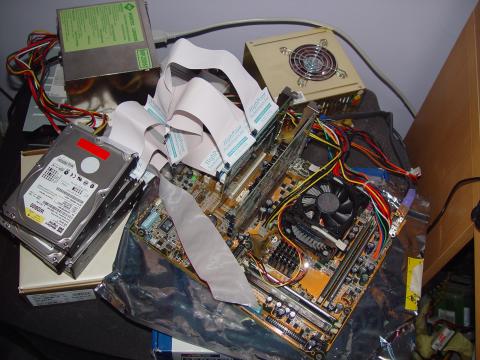 Yes! With TWO PSUs attached (each powering two drives) the system started up and I was able to configure my RAID array.

Jump to a section